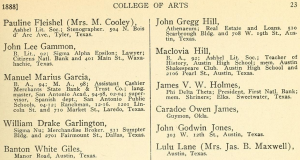 General Register of the Students and Former Students of the University of Texas (1917).

Wealthy families from Latin America have been sending their sons to colleges and universities in the United States since the founding of the nation.  One of the first international Latin American students to attend college in the United States was Francisco de Miranda of Venezuela.  Francisco de Miranda attended Yale University in 1784 becoming the institutions first foreign student (Beavis & Lucas, 2007).   Miranda was one of the privileged sons that traveled to Europe and North America to gain knowledge before returning to Latin America (Lynch, 2006).  Miranda looked to the United States for inspiration as he became a revolutionary upon his return to his homeland.  Miranda led one of the first independence movements in Venezuela before Simon Bolivar.  Others followed in Miranda’s footsteps including Fernando Bolivar, Simon Bolivar’s nephew, who was the first Latin American student to attend the University of Virginia (Bevis & Lucas, 2007). These foreign students returned to their countries and did not support the Latino community in the United States.

Although international Latin American students attended colleges and universities in the United States since the late 1700’s, it was not until the late 1800’s that American Latinos began their enrollment.  Right after the Civil War, a small number of Latinos from the privileged class attended colleges and universities in the new territories of the West (MacDonald & Garcia, 2003).  Universities in Texas, New Mexico and California enrolled Mexican American students in small numbers.

In Texas, Manuel Marius Garcia was the first Mexican American student to graduate from the University of Texas – Austin (MacDonald & Garcia, 2003). Garcia graduated with a bachelor’s degree in 1894, just 11 years after the school opened.  Garcia participated in student groups while at the University of Texas. He was a member of the Rusk Literary Society during his undergraduate years (Cactus, 1894).  He was also part of the Board of Editors of the university yearbook, The Cactus (Cactus, 1894).  Garcia also received his master’s degree from the same institution in 1898.  While obtaining his graduate degree, he was a member of the San Antonio Club (Cactus, 1898).  After his graduation, Garcia continued to live in Texas and held several jobs. He ultimately became the supervisor of the Spanish Department for the San Antonio Public School district (General Register, 1917).  He resided in Laredo, Texas.

General Register of the Students and Former Students of the University of Texas (1917).